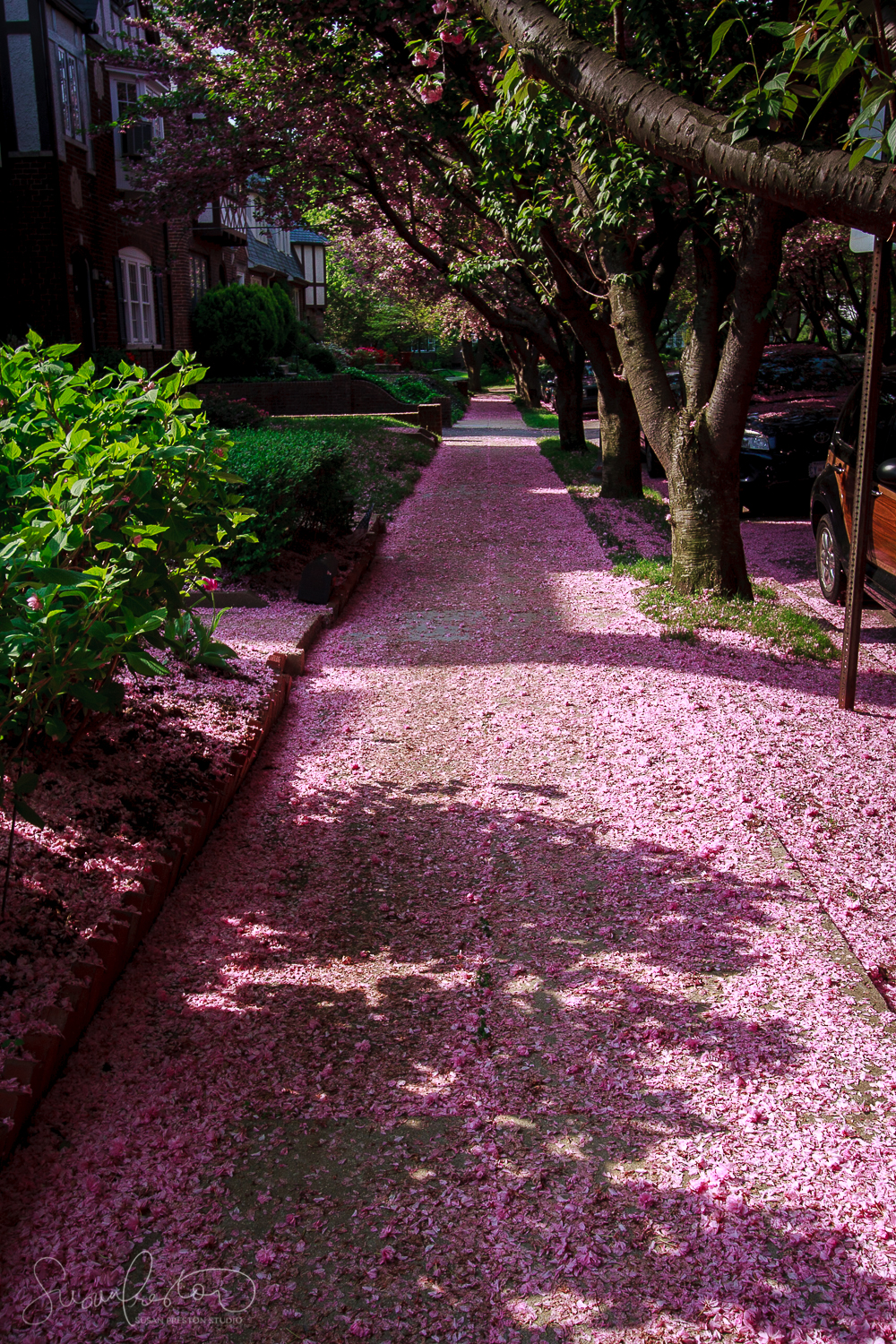 “I confess I do not believe in time. I like to fold my magic carpet, after use, in such a way as to superimpose one part of the pattern upon another. Let visitors trip. And the highest enjoyment of timelessness―in a landscape selected at random―is when I stand among rare butterflies … This is ecstasy, and behind the ecstasy is something else, which is hard to explain. It is like a momentary vacuum into which rushes all that I love. A sense of oneness with sun and stone. A thrill of gratitude to whom it may concern―to the contrapuntal genius of human fate or to tender ghosts humoring a lucky mortal.

Doesn’t this sidewalk look like a magical runway to an alternative universe? So much has changed since I stumbled upon this enchanting scene in my old neighborhood near Georgetown in Washington, DC. That pink carpet has been folded and unfolded so many times the creases are too many to count! And now my path, once petaled and pink, is a volcanic landscape dotted with sagebrush stretching for miles beyond me.

What does Vladimir Nabokov mean when he says he doesn’t believe in time? Is he a nutcase, or is Time just one of a gazillion stories human beings tell themselves? And who among us hasn’t had a memory instantaneously transport her to another decade, if not century? Every single one of us has time–portaled to another realm through the inexplicable scent of a sprig of thyme or the nostalgic smell of an Oscar Meyer hotdog.

Why do we resist these invitations?

Perhaps the misperception of the piling on of moment upon tedious moment is simply an attempt to shield ourselves from a field of limitless possibilities; a failure of imagination; an abdication of responsibility and recognition of the elementary pleasures in simply being human. After all, we must go about the business of chasing after what we think we should be instead of following the starlight of who we could be. Instead of listening to the call, we’ve really important things to accomplish, like reliving the past, fretting about the future, and clipping our toenails.

If we weren’t so conscious of time we’d probably not waste so much of it.

When I lived in Taos, New Mexico – I  believe it was five years from now – I was told the Pueblo Indians have a very different view of time from the rest of us. And as much as scientists would like to unlock the many mysteries of their culture, the elders refuse to allow carbon dating, especially of the oldest and most sacred, portals.

At the time this sounded a bit ridiculous. My judgmental and incurious ego fluttered up with a demand to know. Just how old was the oldest continually inhabited building in North America? 1000 years? 1600? Was I standing in front of 2500 solar revolutions of accumulated dust or a meager 2200?

As the tour guide prattled away, veiling her native Tewa language from the pleading, idiot tourists, “Say something in Indian to us!” I felt my brain hit a snag in the river. Why is not knowing suddenly a problem for you?

Apparently, I’d tripped over a magical kink in a very old Pueblo rug. Somewhere deep in the weaving I could hear a voice singing in counterpoint, “You don’t need to learn what you already know, Susan.”

To Whom it May Concern,

Looking back at my former self, the measuring of the distances travelled, whether merrily skipped, crawled with hands and knees, or anxiously sprinted, is altogether useless. The cost of looking back and overanalyzing the way forward stands in the way of an always present something else that knows the next step forward. It’s through our leaping, not our lamentations, that legacies are born. Taking action and trusting in a given state of readiness is one of the rare secrets I truly need to know.

What a stroke of luck it is to see the power of being mortal.

p.s. Since this might seem like a creative veer off a well worn road, I’ll let you in on a glimmer of the conversation I had 37 months ago with new friends made old in an online leadership program. What a flock of rare butterflies they were! Without me even knowing it, they teased a narrative out from underneath my feet and watched as I pulled the rug out from under myself. This is bullshit! I exclaimed, upon realizing my joke. And once again, the magic carpet unfolded.

The particulars of our cherished bullshit stories isn’t the point. What I offer above are hints of this author’s revised storyline – a split-second, decades in the making novella. But just like that! Somehow, I flipped the next page over. Even the most longwinded epochs eventually find their way to new thresholds.

I don’t think we’re always learning as much as we’re uncovering what is already known. The pity is in the ignoring. Trust your life. Trust the most precious thing you’ve been given to pay attention to. Trust the one thing you can stand upon – the unfolding path that can only be found by walking on it. Walk hand in hand with your one delicious and precious jewel of a life. Though the world may falter, it will not, let you down.